The majority of my readers are from the USA, but I do get some from all over. Quite commonly people ask me when is Pumpkin season in Australia? As we all know pumpkin growing and harvesting takes place at a different time of the year in Australia!

Wherever you live it is important that you time pumpkin seed planting and growth accordingly! If you plant your seeds too early at the start of Spring in the USA, frost might strike and that will be the end of them! Not to mention the fact that you need to factor in when is the best time to plant pumpkin seeds for October or November harvest!

However in Australia they sow their pumpkin seeds at a totally different time of the year!

So when do you plant Pumpkin Seeds if you live in Australia?

According to the Gardenate the best time to sow pumpkin plant seeds is during the months September to December in temperate climate regions. This varies slightly for the colder mountain areas. If you have frost in early September do not sow your seeds outdoors.

In sub-tropical areas of Australia such as the Gold Coast you might even be able to sow your seeds as early as August and all the way through to January!

Keep in mind that growth does take around 4 months from time of planting until harvesting. If you plant in September you should expect your pumpkin fruit to be ready in January!!

If you are from the USA and reading this do NOT PLANT your pumpkin seeds at the same time as they do in Australia! I have tons of advice on this website about how to plant pumpkin from seed which is appropriate for both USA and UK readers!!

Pumpkins grow exactly the same way whether they are planted! They need the same care, pumpkin fertilizer, trimming of the vines and protection from disease and pests. I wonder if Kangaroos would eat pumpkin?!

I have lots of tips on how to grow pumpkins from seeds no matter where you live in the world!

Most Common Pumpkin Names in Australia

Now that we know when pumpkin season is in Australia we can find out if they have any common or well known varieties there.

We know there are lots of different types of pumpkins worldwide, but there are a few that are very common in Australia during their pumpkin season. 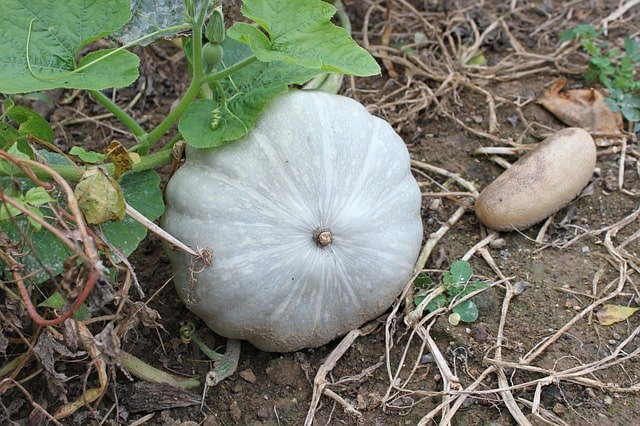 Perhaps these might inspire you start adding some blue pumpkin decor to your home.

Summary of Pumpkin Season in Australia

Plant seeds for pumpkins anytime from September when signs of frost have gone. Harvest around 4 months later! If you plant around Halloween you will have a March harvest! December sowing of seeds will mean you will get to see your glorious pumpkins sometime in April! Then you can enjoy make several of my delicious Pumpkin recipes!

Can you know tell me when is Pumpkin Season in Australia and how does it compare to the time of the year you Grow Pumpkins?