I am always thinking of creative Halloween pumpkins game ideas for my kids while they are off preschool at the end of October. I always try to make these educational!

Previously I have done something similar with my little girl for Halloween! It was called googly eye fish out! She loved it and it really tested her fine motor skills and her patience!

This time around I thought I would adapt this game for my son to include pumpkins in a blue slime which I told him represents a witches broth. The key is to use a small spoon and remove all the pumpkins from the slime before the timer runs out! 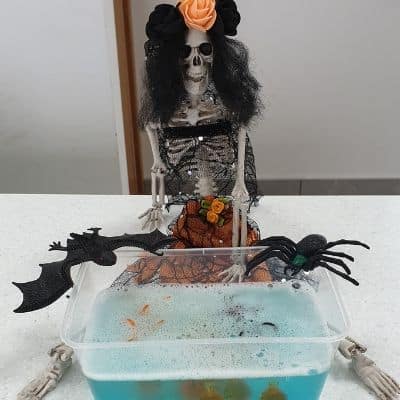 He absolutely loves witches and pumpkins so I knew he would love this game!! Plus he is way more patient than this sister!

What You Need To Create This Fun Halloween Party Game For Preschoolers!

The thing that I love about this simple Halloween pumpkins game is the fact that it is so simple to set up and can be done in minutes (just as well because my kids ask me to play it regularly – I reckon they love the slime).

I have to confess I could only find mini foam pumpkins in my local Poundland so I had to improvise with the plastic pumpkins. It actually was my husbands idea! He found an old set of Halloween lights which had plastic pumpkin covers. Fortunately these were easily removable and unlike their foam counterparts did not get damaged by the soapy water. I think they look dead bright and better than any of the more expensive ones. 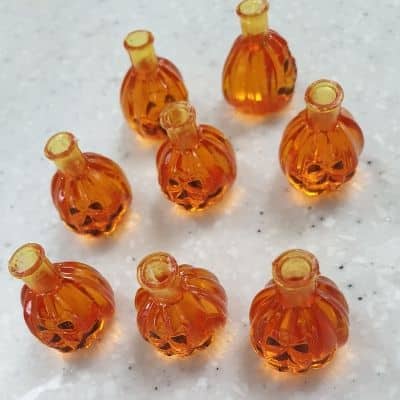 I honestly had so much fun coming up with this one and you can make so many variations of it! You could change the color of the ‘slime’ to make it green, red or whatever color you wish.

I decided against making my own slime as I know my 3 year old loves putting things in his mouth so that’s why I improvised and used thick washing up liquid! Not to mention he might have found it more difficult to ‘fish out’ the pumpkins.

I actually though the hand wash was a great idea because unlike slime it looks foamy with bubbles. This makes it look as if the witch is actually cooking a proper broth with bubbles! Plus the layer of foam means the kids had to fish harder and deeper to find the pumpkins. 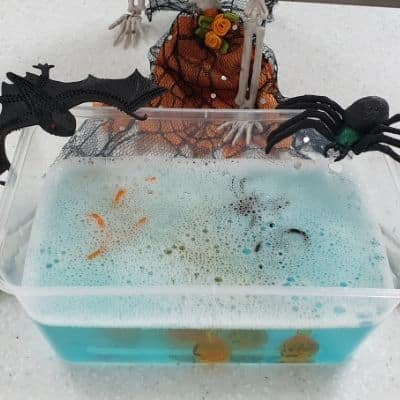 I could not find a traditional witch so I went for a skeleton version. My kids fell in love with her. I have her sitting in the kitchen at the window. Both kids want to keep her in their rooms so I have said she is mine for now!!

How did my kids do with this Halloween Pumpkins Game?

Not surprisingly Amelia and Rhys both loved this Halloween game for pre-schoolers. They had such good fun because it is not something we normally do together. They are also very competitive and liked to see who could get the pumpkins out the quickest.

Amelia was very clever and tried to get two pumpkins out each time. While this was a good idea she did spend lots of time trying to get them rounded up until her spoon. You can see the level of concentration on her face. 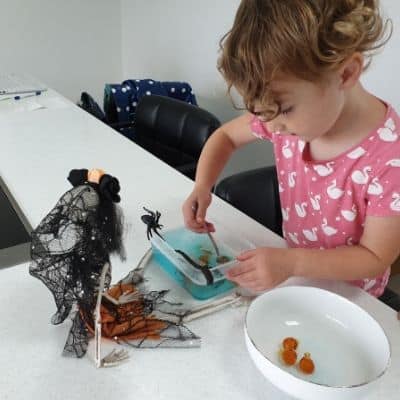 Other Ideas to Make this Halloween Pumpkins Game Even More Fun

You could play this fun Halloween pumpkins game with several kids and see who can get the pumpkins out the quickest! The winner could receive a delicious iced pumpkin cookie as a prize! Now there is an incentive if they ever needed one.

Another great idea is to count the pumpkins as you lift them out. I reckon my 4 year old could get to 10, but I know my 3 year old can only count to 4 or 5 so he would stop there. Still it is a great idea to keep this educational and fun!

Who says the mini pumpkins need to be orange?! Yep we know pumpkins come in all shapes, sizes and colors so why not mix it up a bit! You could then include your pre-schooler to sort these based on color, shape or size after they spoon them out.

A good idea for older kids is to include lots of other things in the witches broth, such as ghosts, aliens, spiders, bats, etc. Try and make it harder to actually see the pumpkins. If they spoon one of these out by mistake they lose points; points are only awarded for fishing out pumpkins.

If you are playing this Halloween game for pre-schoolers at a party you might want to encourage this kids to turn up wearing some cute pumpkin costumes or even a mask.

After the game they fun did not stop there!

I should know my kids are at the stage where they love exploring liquids so they both really enjoyed putting their hands in and out of the soapy foamy liquid after they had finished playing!! I guess this is another reason why I decided to make a pumpkin sensory bin as they are still at the curious stage.

They said the witches broth felt nice but smelt stinky (I used a non fragrant hand wash so think it was their imagination).

Will You Try and Recreate This Halloween Pumpkins Game With Your Preschooler? 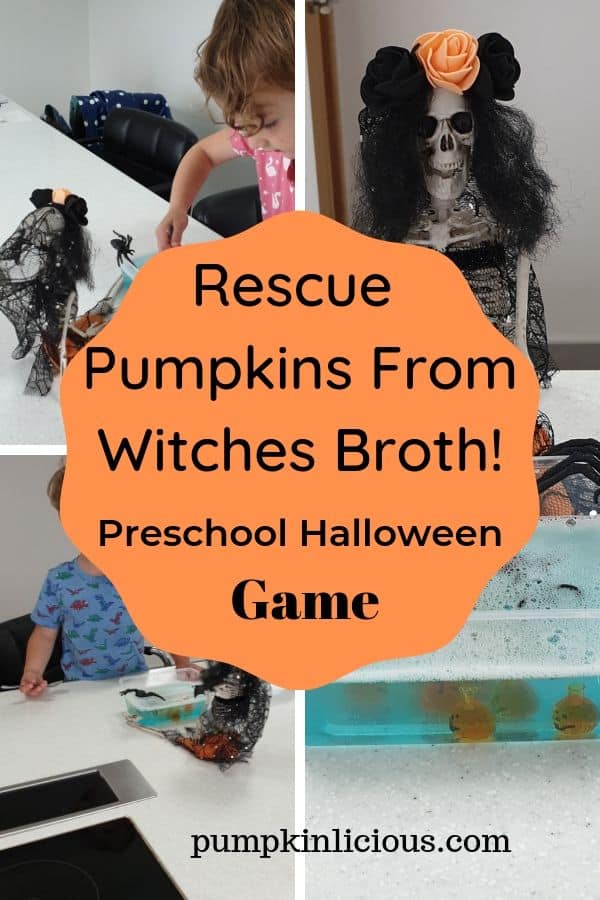